The “Estuaire de la Gironde/Mer des Pertuis”Natural Marine Park is a protected marine area created in 2015. It covers 6500 km² of water space and borders over 1000 km of coastline in Charente-Maritime, Vendée and Gironde.

Missions:
Preserving the marine area and increasing knowledge, while contributing to the sustainable development of maritime activities.

I am involved in preserving the marine area

In the shade of the pontoons 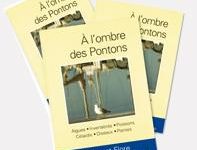 In 2006, the Régie du Plaisance in La Rochelle commissioned a renowned specialists to carry out a study on the biodiversity of the Minimes site, where 3600 pleasure craft are stationed. Edited in the form of a small booklet of a hundred pages entitled “In the shade of the pontoons”, the book reveals to everyone an environment full of life, animal or vegetable, far from the Image of the large sterile boat parking: invertebrates, algae, fish, cetaceans, birds and plants, have their place in a marina.

Each animal or plant class that is part of the harbor’s biodiversity has been studied by one or more recognized specialists. For birds, plants, algae or fish, a good sense of observation and a good knowledge of the environment were sufficient. Laetitia Larénie, at the time student in “Master environment and littoral spaces” at the University of Sciences of La Rochelle, treated three subjects, invertebrates, algae and cetaceans.
Jean Claude Quéro, retired from Ifremer, took charge of the fish file, while Fabien Mercier of the League for the Protection of Birds was logically responsible for birds.

For plants, Guy Chezeau and Pascale Rautureau of “Nature Environnement 17” did the work. The most complicated was the study of invertebrates: Denis Fichet and Pierre-Guy Sauriau, members of the Research Center on Anthropized Littoral Ecosystems of the University of La Rochelle, had to dismantle and return a catway with the help of our technicians To be able to take the samples necessary for the study carried out by Laetitia Larénie.

The Fauna & the flora

The study of the samples revealed the presence of an incredible number of species that colonize the floats of pontoons and catways. Sponges, crustaceans, molluscs, annelids, ascidians, often of microscopic size proliferate on all the submerged supports of the port.

Red, green or brown they are present on the dikes, on the boats of the boats and participate with the invertebrates in the colonization of pontoon floats.

From the unmissable mule to the sole through the bar and the tacot, there have been counting about thirty species of fish present in the harbor permanently or occasionally.

They are not really part of the port’s biodiversity but their occasional visits are always appreciated and noticed.

A port is not very welcoming to plants: apart from those that are planted and maintained by the services of the city the species that adapt best are those called “halophiles”, that is to say resistant to salt.

Birds of sea or land, migratory or not they are about thirty species to find their happiness on the site of the port.